Autumn Season. Full Meaning and pictures of the Autumn 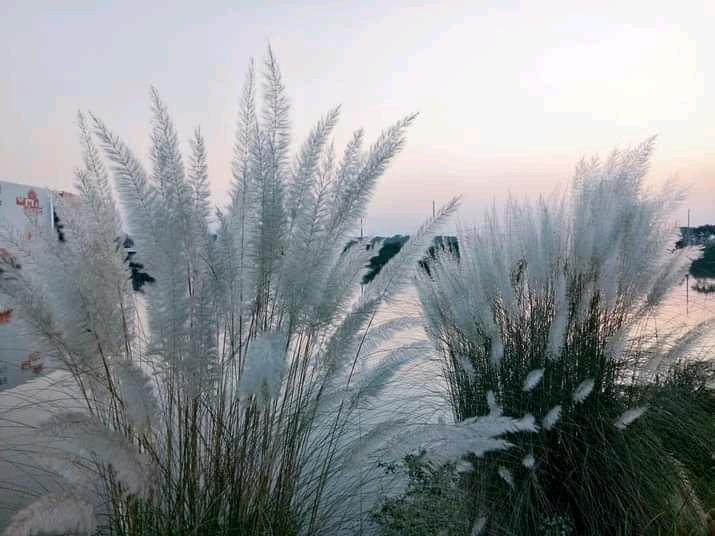 Autumn Season is one of the most popular season in Bengali’s mind. Temperature is always good and enjoyable. Urban people come to the rural environment to enjoy Autumn day.

The Queen of seasons is Autumn, the third season of Bengal. Autumn arrives when the monsoon rains end. The Autumn Season.

Autumn season consists of the month of Bhadra and Ashwin.

Autumn (Sharat) lasts in Bhadra and Ashwin (mid-August to mid-October). Traditionally this is a season, when housewives use the rain to dry clothes, get dirty and damp, for the wind and in the scorching sun of Bhadra. However, Bright days are often interrupted by sudden showers. The black clouds in a gray sky, characteristic of the Rainy season, are replaced by white clouds floating in a blue sky.
Although at the beginning of this season, the days may be hot and humid, the nights and mornings get colder towards the end of the season. The gradual decrease in humidity also makes the weather comfortable.

Lots of fragrant flowers bloom in Autumn season. Such as-
Shiuli,
Rose,
Bakul,
Mallika,
Kamini flower and
Madhabi.
The lotus grows in wetlands and blooms on the banks of rivers.

This is also the time of ripening palmira.

Bhadra and Ashwin are Autumn in these two months. At this time, at the end of the monsoon, white clouds like cotton float in the Sky. In the field, cashew flowers and green paddy cover the eyes. Autumn festival season.

Durga Puja is the biggest festival of Bengalis at this time.

People’s minds are filled with joy. However, due to the change of seasons, people get colds, coughs and fevers. Autumn is the favorite season of many peoples-mind.

Bangladesh is our country of six seasons. Each season shines with different characteristics. In the morning, nature is beautifully decorated. In the Autumn morning, people are fascinated by the pleasant smile of Nature. The gentle serenity of the Autumn nature attracts everyone. Whenever the rains come, the invisible arrangement of the appearance of the Autumn beauty continues behind the scenes on the stage of nature in Bangladesh. No one knows when he appears in silence. Many times the Rains go away but Autumn is a little late. Suddenly, one day people woke up and saw that the sun’s rays had fallen on the dewy grass and formed thousands of pearls, then we have no doubt that the beautiful Autumn has appeared in the bosom of Bangladesh.

Light fog in the autumn morning and Dewdrops are the main gifts of this season. The crimson sun rises in the eastern sky. The raft of innumerable white clouds floats in the Blue-sky. The shadow of the blue sky falls on the chest of the calm river. Numerous cashew flowers are blooming near the river. Waves play in the gentle breeze. The fields and ghats glistened in the soft sunlight of the sky. The white buck stands on his knees absorbed in the Water. The number of geckos and wild cats increases in the lake. Doyle-quail and various birds chirping in the surroundings.

Flowers of various colors bloom in the Autumn morning of Autumn. The white beauty of Jui, Togar and Malati flowers is all around. In the Autumn morning, dew-drenched Shefali flowers smile on the grass with their unique beauty. In the sky, in the air and in the grass, Autumn spreads its soft beauty. Due to its unique beauty, the nature and environment of Bengal became majestic.

The gentle breeze of Autumn morning makes the body tremble. Everything should shine when it falls in the first rays of the sun to eat the field crops. The beauty of the Autumn morning creates a captivating Atmosphere.

The pleasant atmosphere of Autumn morning cheers the Human mind. The movement of rainless white clouds across the sky brings peace to people’s minds. The sweet radiance of the morning makes people’s minds think. In the morning, the Dew drops on the grass, the decorations of flowers blooming in different trees, the chirping of birds calling in the trees, the fragrance of different flowers etc. are incomparable.

Making various cakes in the autumn morning is a part of Bengali culture. Every morning breakfast is served with pie in almost every house in the village. In addition, relatives and friends are invited to the cake. In this way Bengali culture has been kept in the village since ancient times.

Bangladesh is an agricultural country. Most of the lakes in this country make a living by farming. Autumn comes immediately after the monsoon. Then the farmers are very Happy. Because in this season the possibility of harvest arises. During the long Rainy season, there is only water and water in the field. The farmer cannot take proper care of the crop. Therefore, with the arrival of Autumn, the farmers are again happy with the new crop. The gusty wind ripples through the paddy fields and shakes the farmer’s mind. The breeze blowing in the nature relieves all the fatigue of the Farmer. They care for the crops in the land with joy in their minds and dream of happiness in their minds.

Autumn morning brings a new look to public life. Then the rural roads are dry. There is no mud anywhere. The busyness of the people starts from the morning. Everyone rushes to their workplace. Crowds gather at rural ferries.

Autumn mornings are especially captivating in the minds of poets and writers. The indescribable beauty of Autumn fascinates people. At this time Bangladesh was decorated in a unique way. Especially in the Autumn morning, it grabs everyone’s mind by spreading various beauties.

Appearance of the nature on the Autumn season.

At the end of Shravan, when the continuous rain stops, nature takes on a new look. White clouds float in the sky, the Sun shines and the air is clear. The flock of birds flew like a garland, touching the edge of the bright blue of the Sky. Autumn brings a sweetness. As a result, the world turns into an amazing glory. The green paddy fields in the sunlight are captivating.

Beautiful trees, leaves slowly changes from green to orange color, and from red to yellow, are the first things that come to the mind for most people. It is a splendid sight diving to the store, or even coming home from work.

The crisp, refreshing Autumn air fills everybody’s nostrils and lungs. People need beauty, and it comes every year in the form of Autumn.

Day and night effect during the a Autumn season.

How to look like Environment during the Autumn season?

A unique look can be noticed in the nature of Autumn. The trees became fresh and beautiful. The paddy fields became green deserts. White cashew (kashful in Bengali) flowers peek out from the river bank. On the floor of the hyacinth, there are a lot of hyacinths mixed with white and saffron colors, spread like a sheet on the grass wet with light dew. With the arrival of Autumn, the forest quail of Bengal, Doel, Moyna’s call became the mouthpiece.

The main attraction of Autumn is Durga Puja. Which is the main festival of the hinduism Bengalis. That is why Durga Puja is called in the Autumn festival. Bengalis have been waiting for the arrival of Durga puja all year round. After that waiting period, Durga puja came to Bangla’s house. Bengalis are intoxicated with the joy of the festival. There is no limit to the joy of children during school holidays. Apart from Durga Puja, the best festival of Bengal, Lakshmi Puja and Kali Puja are celebrated this Autumn.

White clouds float in the sky and white cashew flowers on the river bank, light hyacinth flowers in the morning, Autumn is like a season of whiteness. It cannot be understood without seeing with the eyes. It can be said that Autumn is one of the most beautiful season of Bengal.

1. Why do leaves fall during Autumn?

Answer: During this time, trees lose a lot amount of water. When winter arrives, trees are no longer able to get much water.

2. What are the months that makes the Autumn?

Answer: Autumn arrives when the monsoon rains end. This season consists of the month of Bhadra and Ashwin.