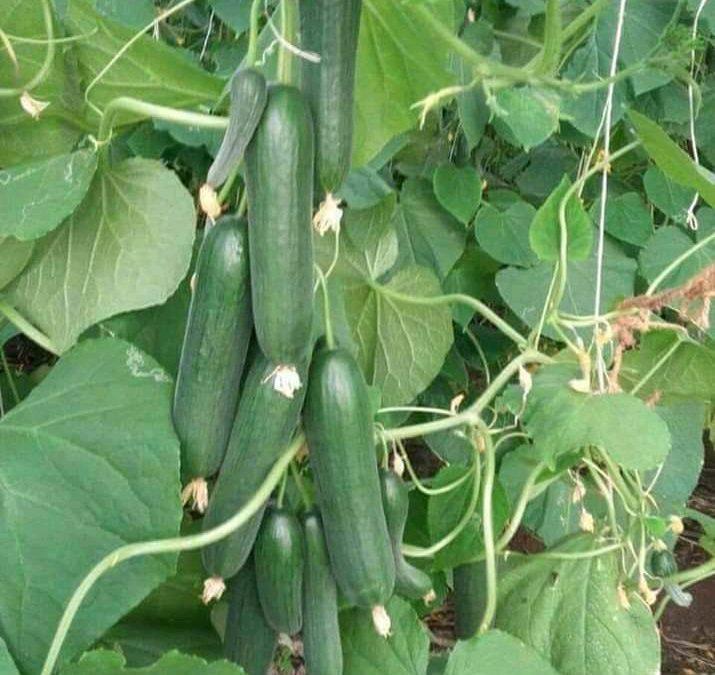 Cucumber cultivation. Most of the people are unknown to cultivate it. Not only that, this post help how Farmer cultivate cucumber.

Cucumber is cultivated in both summer and monsoon seasons. Summer Crops: January to February
Monsoon Crops: June to July
Seeds are sown in April in the hills of Meghalaya.

Although cucumbers work best in loose sandy loam soils, they can also be grown in any well-drained soil. Cucumbers must be grown in full sunlight. Since their roots reach 36 to 48 inches deep, do not plant them in a place where tree roots will take away their water and nutrients.

Cucumbers can be grown in a wide variety of soils from sandy loam soils to well-drained clayey soils. Add organic compost fertilizer or any farm yard fertilizer (FMY) for higher yields to ensure that the soil contains organic matter. The soil pH should be between 5.5 and 6.7, optimal for growth.

Side-dress with cucumber 1-1/2 ounces 33-0-0 fertilizer per 10 feet row one week after the first flowering starts and again three weeks later, sprinkle granules or powder evenly on the soil 6 inches away from the base of the tree then apply fertilizer on the soil.

The best fertilizer for cucumber is well-matured compost fertilizer. Compost contains only 2 percent nitrogen and is released slowly over many years. The cost of compost fruit will not cause vegetation to grow. Instead, it adds reserves of nutrients that are found in the soil in the long run.

These are very easy to grow and very effective. Planted in a part of the garden that receives full sun and contains equally moist, fertile soil, the success of growing cucumbers is almost certain. Like other summer herbaceous crops, cucumbers need heavy food supply and uninterrupted water supply.

Cucumbers can grow best at relatively high temperatures between 75 and 85 degrees Fahrenheit. Plants do not tolerate frost. Since these are fast growing crops, they must be well supplied with moisture and plant nutrients during the growing season. Water is especially important for cucumbers during the fruiting stage.

One of the most interesting reasons for growing cucumbers from seeds is because they germinate very quickly. Their germination time can be anywhere from 3-10 days. If you want to speed up germination, keep the soil warm using a heat mat inside the house, or plant outside in full sun.

Farmers usually plant 40,000 to 90,000 trees per acre. Some farmers plant 150,000 per acre. Although most cucumbers are picked by hand, large operations are cut mechanically.

A cucumber tree bears fruit in summer, 35 to 60 days after planting in the garden. When growing cucumbers from seed, it will take about 10 more days (45 to 70 days) for the plant to bear fruit. Cucumbers are annual and live only one year, which means they die after producing fruit for the season.

Cucumbers require a long growing season, and most are ready for harvest within 50 to 70 days from planting. Fruits ripen at different times on the vines, but it is important to pick them when they are ready to avoid the bitter smell on the cucumbers left on the vine for a long time.